Our ecletic troupe of music-makers have been referred to by various monikers but one name that has stuck around is Selah Vie.

Selah is another Hebrew word with many meanings.  Two that we relate to primarily have to do with hymn singing, congregational singing, and how to most effectively use music in a sacred or contemplative context.

Besides being a name for our group of players, Selah Vie also speaks to the way we try to approach the diverse repetoire of hymns and songs we are fortunate enough to work on each week.

In Psalms the word selah appears extensively as an instruction to the reading (or singing) of the text, something like “stop and listen” or “pause and think of that”. Psalms are often sung accompanied by instruments and selah appears like a ‘stage direction’ to mark a place for the singers to pause while the instruments continue to play so that attention is given to the preceding line, similar in purpose to how the old ‘Amen’ at the end of a hymn looks back at what was just sung.  Another interpretaion is to ‘hang or to weigh’. It was common in those times to hang something on a scales to weigh its value, or quality. So selah here indicates that we should weigh the value of the passage, the message, “what do these words say to me?”

Have you ever noticed how traditional hymns generally tend to march right along with very little pause or ‘space’.  A consistent rhythm does help keep a congregation together (and awake). A hymn is a prayer after all more than some kind of dramatic musical performance.  But just as the meter of the poetry in scripture (along with the frequent instruction of selah in Psalms) encourages reflection, so a musical rendition of a psalm or any other hymn-like piece should do likewise, not simply be recited without thinking.  Hymns were usually written initially as verse without music.  Then the writer, or another musician would later adapt a melodic arrangement to the hymn to match the meter of the written verse.  This accounts for some of the regularity in many of the hymns.

But in modern times, actually since the 19th century, it has become more and more common to introduce innuendo, a pause here and there, framing the music and words in space just as the busy, repititious, detailed architecture of the Baroque period transformed into more open and fluid lines in contemporary architecture and music.  Going back to the ancient music of gregorian chant and earlier, space also played a major role.

Vie is Latin for Life.  So, Selah Vie suggests we pause to consider life, or in the case of the songs we sing, pause here and there to reflect on what that line we just sang really means to us, to our lives.  The Selah Vie players are here to encourage congregational involvement  and support the message of the day. Whether the congregation sings along, or the song is presented as a musical meditation, whether it’s one of the tried and true standards from the hymnal, or something never heard before, maybe even from another tradition, it is always our intent that every piece involves us all together, just as in worship, it is an active process for singer or listener.  We are not ‘performing’ so much as we are attempting to co-create a space for all to inhabit and explore together.

Pastor Jeremy Ashworth works with us to select songs that will hopefully resonate in various ways with the particular message he has prepared each week.  Sometimes we are more successful at accomplishing that than other times, and sometimes we even discover connections occuring spontaneously we hadn’t even considered.

Currently, (as available) our players are:

Since joining the music team at Covington Community Church I’ve been introduced to an incredibly rich diversity of music history. I am working on  a series of my investigations into Hymnody elsewhere in this Sound Possibilities Forum see: Hymnody, Psaltries, Psalmist and Hymnists, Oh My!

When I have time, I will also try to gather some interesting stories and background to some of the songs we will be singing that week. Here are a few we’re doing this Sunday, August 28, 2011.  Enjoy! 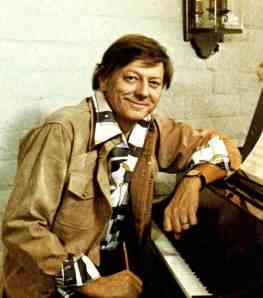 Oh, this is the day that the Lord hath made
I will rejoice and be glad in it.

John W. Peterson was born in Lindsborg, Kansas, beginning his musical career while still in his teens.  He later attended the Moody Bible Institute and served on the Radio Staff there for several years. In 1953 he graduated from the American Conservatory of Music in Chicago.  For over ten years he resided in Grand Rapids, Michigan as President and Editor-in-Chief for Singspiration, a sacred music publishing company.  Mr. Peterson has composed well over 1000 individual songs, 35 cantatas and musicals, approx. 10 million of these cantatas and musicals have been published and sold.

In 1967, the National Evangelical Film Foundation presented Mr. Peterson with the Sacred Music Award in recognition of his accomplishments in the field of sacred music.  In the same year, he received the honorary degree, Doctor of Sacred Music, from John Brown University.  In 1971, he received the honorary degree, Doctor of Divinity, from Western Conservative Baptist Seminary in Portland, Oregon; and in 1979, he received the honorary degree, Doctor of Fine Arts, from Grand Canyon University in Phoenix, Arizona.  In 1977, his autobiography, “The Miracle Goes On,” was published by Zondervan Publishing House, and a film by the same title was released by Gospel Films.  In 1986, Mr. Peterson was inducted into the Gospel Music Hall of Fame. Read more at his website: http://www.johnwpetersonmusic.com/johnw_.htm

Little is Much When God is In It   by Fred and Kittie Suffield, 1927

In the harvest field now ripened,
There’s a work for all to do;
Hark, the voice of God is calling,
To the harvest calling you.

Does the place your called to labor
Seem so small and little known?
It is great if God is in it
And He’ll not forget His own.

When the conflict here is ended
And our race on earth is run;
He will say if we are faithful,
Welcome home, My child well done.

Little is much when God is in it,
Labor not for wealth or fame;
There’s a crown and you can win it,
If you go in Jesus’ name.

“The smallest family will become a thousand people, and the tiniest group will become a mighty nation. At the right time, I, the Lord, will make it happen.”  — Isaiah 60:22

One snow-blanketed night, Canadian Fred Suffield awoke to an urgent pounding on his door. A half-frozen man reported that a train had stalled in the blizzard, and the passengers were in danger of freezing to death. Lighting a lantern, Fred followed the man to the site and led the travelers back to his house. Later one of the passengers, Kittie, wrote a thank you note. Fred replied, and Kittie wrote back. Their correspondence led to courtship and to marriage.

Some time later, Fred and Kittie attended a church in Ottawa pastored by Rev. A. J. Shea, and there committed their lives to the Lord. One summer they invited Rev. Shea’s teenage son, George Beverly, to spend a month with them in Westport, Ontario, holding evangelistic meetings. One night, accompanied by Kittie on the piano, Bev attempted to sing, but his voice cracked on the high notes, and he sat down mortified, vowing never to sing again. But Kittie wouldn’t hear of it, suggesting he sing in a lower key. He did, and he kept on singing and singing and singing…

Many years passed, and in June of 2000, Billy Graham came to Nashville, Tennessee, for a four-night mission. At a reception for the Graham team just before the meetings began, George Beverly Shea, at 92, rose to sing. His rich baritone voice broke into a song that had been written 73 years before by Fred and Kittie: “Little is Much When God Is In It.”

Blessed is the spot, and the house, and the place,
And the city, and the heart, and the mountain,
And the refuge, and the cave, and the valley, and the land,
And the sea, and the island, and the meadow.
Where mention of God hath been made,
And His praise –  glorified!

As a teenager growing up on Chicago’s north shore, one of my favorite places to ride my bike to was the Baha’i Temple in Wilmette, Illinois on Lake Michigan. (below left).  The newest Baha’i Lotus Temple (below right) is in New Delhi, India.  Too far for my bicycle. 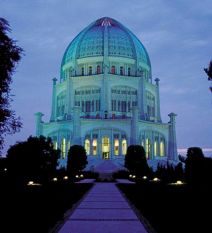 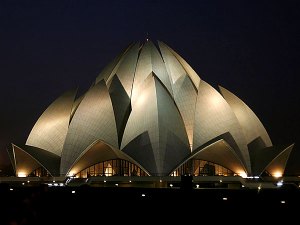 The Baha’i faith is a monotheism that embraces all major religions, positing that God enlightened humankind over the ages by sending prophets — Abraham, Zoroaster, Krishna, the Buddha, Jesus and Muhammad. The Bab and Baha’u’llah were the latest in the chain. Baha’is revere marriage, family, public service, universal peace and brotherhood, and both science and religion, since both seek truth.

As noncontroversial as that may seem, it hasn’t  prevented Baha’is from being persecuted, mostly in Iran, where they are regarded as apostates. The problem is with the idea that the Creator sent a messenger after Muhammad, whom Muslims regard as the final word — “the seal of the prophets.” The 300,000 believers who remain in the Islamic Republic routinely face discrimination and even arrest. Baha’i youth who want to attend university must hide their faith because adherents are barred from higher education. Approximately 5 million Bahai’s are spread throughout the world with the majority in India, North, Central and South America and their World Center Headquarters is located in Hafiz, Israel. 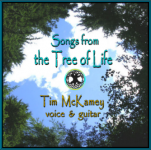